How to Properly and Effectively Water Your Trees

The assumption that rain will provide the necessary irrigation needs for your trees to survive and thrive is false. As a homeowner or businessowner, watering your trees can change the longevity of your tree when climatic conditions such as droughts, or wet seasons come about.

This Wisconsin summer has varied from being a typical midwestern summer, to experiencing heat waves, to supplying copious amounts of rain and thunderstorms. So, if you find yourself sitting on your cedar wood deck, admiring your tree filled backyard, while sipping on lemonade, look at your trees and run some tests to see if they need the water they so deserve. But to properly water your trees, you need to understand the requirements, irrigation location, and irrigation rule of thumb.

It is no surprise that mature trees have a developed root system. A developed root system is grown when a newly planted tree receives the irrigation and nutrients necessary to become established. However, once established, some tree species need added watering, and some do not. The best way to test if trees need added water is to push a screwdriver into the soil surrounding the trunk of the tree. If the screwdriver passes easily, the soil is still moist. If it takes a little bit for the screwdriver, the soil is dry and must be replenished.

A few common Wisconsin trees that need extra watering if there is less than 1 inch of water per week are Birches, Spruces, any stressed trees and new trees.

Summer is the hottest and driest time of the year, at least that’s what people who aren’t from Wisconsin say. In the beginning of the summer season, trees store the moisture they acquired over the winter. Later in the summer, you will find this moisture has been expended, resulting in the need for irrigation. Expended moisture, as stated above, is indicated by using a screwdriver around the trunk of the tree.

When experiencing a drought, the acquired moisture stored in the soil is used up almost instantaneously. This makes the need for continual irrigation increase in tree species that would normally thrive without continual irrigation. New trees should be watered weekly and deeply with 5 to 15 gallons. Mature trees can be watered monthly, if water retention reaches 8 to 12 inches.

Years producing high rainfall are known as wet years. These years require very little to no extra irrigation. Copious amounts of rainfall generally require irrigation in early or late summer, which is tested by poking in the ground with a screwdriver.

Mature and new trees can both achieve their irrigation needs through varying types of watering applications. These water applications can include sprinklers, drip irrigation, bucket dumping, and a simple hose.

As stated before, newly planted trees root ball area is more susceptible to drying out due to their lack of an extensive root system. To combat against dry out, regularly irrigating the root ball area, located directly below the trunk, and checking moisture sustainability is suggested for the first month or two. New trees “regular” water pattern should occur weekly depending on moisture sustained from the last irrigation regiment.

Mature trees have a developed root system that expands far beyond the canopy of the tree. The canopy is described as the upper layer of the tree, or the section with leaf growth. The outer sections of the canopy, or leaf area, is known as the dripline. Between the outer half of the canopy and the dripline is where irrigation is suggested. This is to ensure all roots that extend beyond the canopy are accounted for. Most tree roots are in the upper 12 to 18 inches of the soil, which means this should be the target area when irrigating a tree. A sprinkler works best for mature tree watering.

Hoses make the job of watering a tree easy; so, after your long day of work, grab that hose and give your tree a drink!  A convenient practice is turning the hose to a slow dribble and placing, depending on the age of the tree, within proximity of the trunk, or within the dripline, for thirty minutes, and rotating to ensure every part of the tree is watered.

If the tree is mature, this process will range anywhere from 2 to 3 hours. This process is longer because moving the hose farther and farther out into the dripline is suggested to ensure the extensive root system is accounted for.

A soaker hose allows for small beads of water to escape for the extent that the hose is turned on for. Wrapping the hose around the trunk in the shape of a swirl is suggested for equal irrigation. This process should take an hour or more depending on the tree and moisture retention.

If a sprinkler is the irrigation method of choice, the water pressure should be turned down to ensure the leaves are not being hit, as the irrigation process does occur below the tree itself.

If you do not have a hose, soaker hose, or sprinkler, a bucket is the perfect option. When using a bucket, it is important to ensure that run-off or pooling does not occur due to dumping too much water around the tree too quickly. If this does occur, allow the water to soak in, and begin again if you believe the water you dumped did not soak 12 to 18 inches deep in the soil.

When planting a tree with Wachtel we provide science-based aftercare and tree care recommendations. However, having a basic understanding of the irrigation process is always recommended to ensure your backyard, lemonade sipping experience is filled with rejuvenated trees. 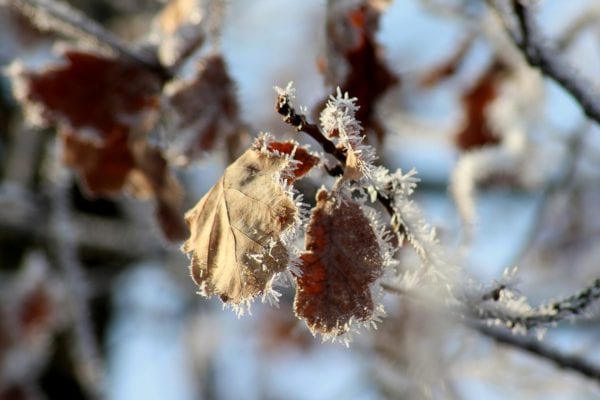 Trees with Leaves in Winter – Is It Possible?

The brilliant colors of fall entice each one of us to get outside, go for a walk, and enjoy the beauty around us, but when we begin to see those colors fall, we know the winter cold is upon us. What if the beautiful fall leaves on my trees have not yet fallen by February? 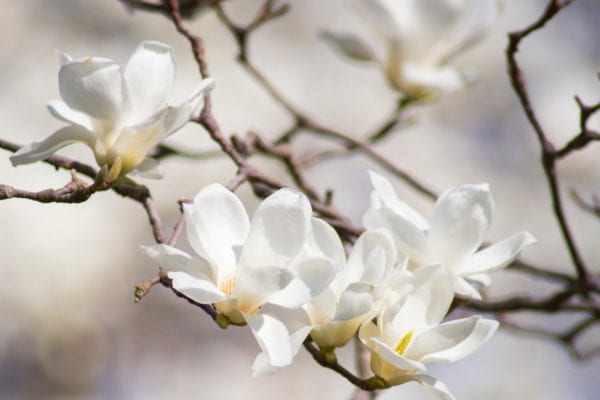 Do You Need a Tree Consultation after Strange Winter Weather?

The large pine tree in your front yard has endured a steadfast fall and has been struck by winter right away. Covered in ice one day, then experiencing temperatures into the 50°s the next; your pine is facing strange winter weather. 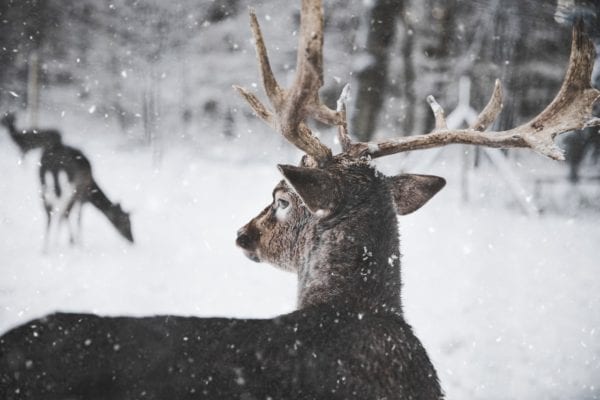 How do Animals Damage Your Trees in Winter?

During the spring, and summer we are often protecting those plants most susceptible in our gardens. We add wire around our hydrangeas and rose bushes to prevent deer from chomping on new growth, buds, and fully developed segments. 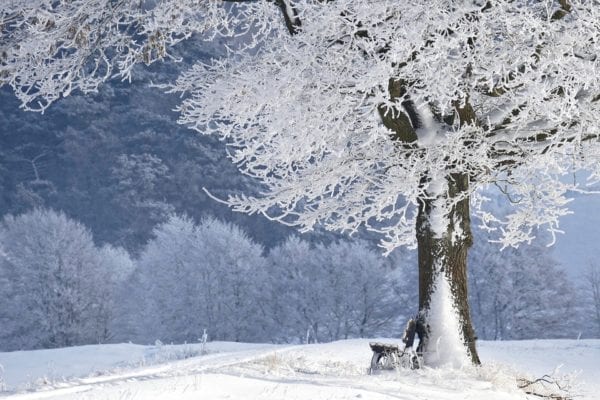 How do Trees Survive the Winter Cold?

The layers of a tree that live below the ground, and sometimes even two feet of the trunk are covered and protected with a healthy layer of snow. The exposed part of a tree during winter experiences the brute of every storm.