We care about our clients and our employees. See our response to COVID-19: Read More 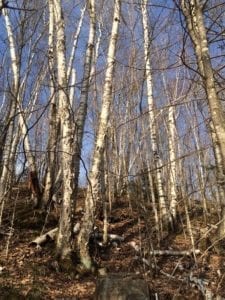 Birch are highly coveted trees known for their extremely ornamental bark, pretty fall color, and fine textured growth habit. They have been important trees in folklore, useful for woodworking, and utilized in the cosmetic and pharmaceutical products. You can even make beer from the sap. Birch trees fit into our psyche like ‘mom and apple pie’.

The most common birch species in the local Wisconsin landscape are paper birch, river birch and ‘Whitespire’ birch. There are some newer varieties coming into the market place that
show promise. However, birch do have a reputation for being a bit finicky to grow. That being said, there are many birch trees out there gracing our landscapes. So what is the secret to growing a nice birch tree?

I still think the good old ‘paper birch’ is the birch of choice for our area; it is the most beautiful of trees. I have a nice specimen in my yard and have it treated yearly with soil systemics. It is thriving with thimbleberry, anemone, and hosta growing around the tree. I do like the river birch as well; the vibrant cinnamon brown / orange flaky bark is quite an attraction. Personally, I probably would avoid ‘Whitespire’. This species does not seem to grow well in most of our area soils.

Here is a poem that sums up the birch:

“Beneath you birch with silver bark
And boughs so pendulous and fair,
The brooks falls scattered down the rock:
and all is mossy there”