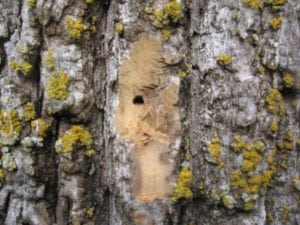 As I walk properties in Mequon, the North Shore, and other areas, I am amazed at what I see. Many, many ashes that showed no dieback or significant deadwood a year ago now do. A whole host of other ash that “don’t look too bad” to the casual observer has significantly thinned out. The damage continues to happen and some people are noticing, but the vast majority of people still have not.  The emerald ash borer invasive species is a dangerous combination.

Since the emerald ash borer was first discovered in Michigan in 2002, the dire warnings of what this insect would do started. There were announcements from state and federal agencies, from UW-extension, scientists, and researchers. The invasive emerald ash borer warnings appeared on radio, television, and print media. But there was one problem. The insect was taking much longer than expected to get here! This is really a good thing because it allowed more time to get prepared, for saving the funds needed to address the removals that would come or for the treatments that could save some. However, the years added up, and still no EAB. I have become aware of fatigue that has set in for many people. They are tired of hearing about it and figure that they can wait until the first trees in their neighborhood die first. Then they will take action.

The problem with this is two-fold. First, the invasive emerald ash borer has surprised us in that it is so well distributed already. The fact that the D-shaped exit holes are very hard to find has delayed the discovery of EAB in most places.  Second, the invasive emerald ash borer has been invading trees for years, so now the damage has reached “critical mass” and deadwood is appearing at an alarming rate. The insect has effectively snuck upon us!

If we examine the experiences of places like northern Illinois, where devastation has already occurred, it is always the same: when the dead trees started showing up, the people were caught sleeping. Many panicked and sought to save their trees then. But at that point in the progression of EAB damage, many dollars saved only a few trees because the damage had already been done inside of them.

Kenosha County, Walworth County, and an increasing amount of area in the southern half of the Milwaukee metro area is also starting to lose trees at an alarming rate.

Much of the northern half of the metro area is just before that point. Damage has started to add up. But there are still many ash trees that are in good condition that could be saved. Don’t call next year and wish you had called this year. I stand up on top of my soap-box and declare as loudly as I can: the time is now – make your effort count to save the most trees/have the best chance at saving some this year.

Call your Wachtel Certified Arborist to help you make the best selections to make your dollars count the most.