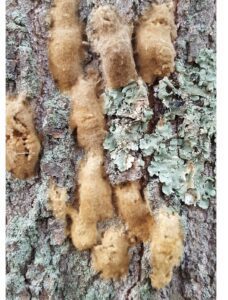 Spongy Moth originated in Eurasia and was intentionally brought to the United States in 1869 in the hopes of interbreeding and developing a silkworm industry in the west. What could go wrong? The moth has since become one of the most destructive defoliators of Eastern Hardwood trees. They are said to feed on 500 species of plants; however, they prefer Oaks and if available White Oak ‘family’ trees. They are a ‘tussock moth’ with tiny tufts of hair on the larval body. These tiny hairs can cause skin and respiratory irritation.

The female caterpillar has wings but cannot fly – so getting around can be a limiting factor. However, as tiny caterpillars they produce a silk thread and are carried by wind to other trees. They can also be transported longer distances when humans unintentionally move wood or other items with egg masses attached. Egg masses can contain up to 1,000 eggs.

During the summer of 2021, several Wachtel Arborists noted small areas of Spongy Moth activity in Southeastern WI. Easily seen by the trained eye due to the loss of leaves during the early summer season. Closer inspection of these areas revealed caterpillars, 2020 egg masses on the undersides of large limbs, and 2020 pupae stuck to the bark surface and crevices. Most were limited to a small group of trees and often not even on a client’s property. However, the caterpillar did have success during the dry 2021 season and as of 2022 numerous smaller areas of outbreaks have been revealed throughout SE Wisconsin.

Besides your Wachtel arborists noticing the WI DNR also noticed the populations increasing. During Spring 2022, WI DNR performed control treatments to state owned forest and park areas including: Devils Lake State Park and Kettle Moraine State Forest, Southern Unit. Due to the large acreage involved these treatments involved aerial applications. The treatment is a mist spray to the forest canopy of a bacteria known as Btk or Bacillus thuringiensis var. kurstaki, a naturally occurring soil bacteria that kills small spongy moth caterpillars when they ingest it. This material is not toxic to people, bees, pets or other animals. This material is effective when applied to smaller young caterpillars, usually during May.

Since Oak trees are generally large and tall, spraying from the ground to control Spongy Moth is a challenge. Most products are not allowed to be used around open water areas or where spray drift may fall on a neighboring property (without permission). Depending on the size and number of trees involved, alternative soil applied systemic materials may be a better option for control.

A couple of natural controls can also help slow down Spongy Moth. Entomophaga maimaiga is a fungal species which kills Spongy Moth. This fungus activity is enhanced by moist weather and Spongy Moth populations. Once involved this fungus can naturally control Spongy Moth, but the occurrence is highly variable and unpredictable. The other naturally occurring control is even harder to spell and pronounce: Nucleopolyhedrosis Virus or NPV.

If you have some Very Hungry Caterpillars feeding on your Oak trees it is best to start with a call to your Wachtel Tree Science Arborist to consider treatment options for next Spring.